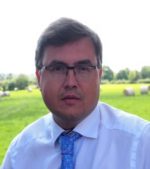 Sergei Valev Graduated Moscow State Technical University with a master degree in Microelectronics and Solid State Physics in 1996. Qualified for the National management retraining program and joined a course in international business in Export-Akademie Baden Wurttemberg, (Germany) in 1998. Continued business education in MIRBIS business school in Moscow in 2000-2001.

Job experience: In 1996 – 2000 worked for an automotive electronics company Autoelectronika, where from 1998 was promoted to International project manager. In 2000 started an independent business by a collaboration with Mozaik Technology Ventures (UK) as their regional representative. By 2005 business developed into a group of trading companies. Group is an active supplier of turnkey projects for advanced packaging and thick film hybrids. To increase exposure of its service team SV took the directorship of Honeystone Ltd. based in London. Since 2015 the company is involved in several R&D consortiums and offers process equipment and staff training. SV co-authored a number of technical articles and participated in several R&D projects with EU-based companies.

IMAPS ties: Joined IMAPS Russia chapter in 2001 and became a member of ELC in 2003. Participated in IMAPS Europe events starting from EMPC in Strasbourg in 2001. Corporate member of IMAPS UK since 2016, participated in several chapter events as an exhibitor.