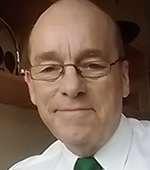 Andy has been a member of IMAPS-UK since 2002 and a member of the IMAPS-UK Committee since 2004, taking on the role of Vice Chair in 2005 and becoming Chair in 2007. During the 6 years in office he was involved with overseeing a transition of the IMAPS organisation requested by USA and Europe, revising the office support and hosting the 40th Anniversary MicroTech. Andy also introduced a series of very successful 1 day workshops on Microelectronic Packaging, before taking on the role of secretariat for IMAPS-UK (2015 – 2019).
Andy’s business life revolves around being CEO of PandA Europe, a technical consultancy in Microelectronics interconnection, packaging and assembly technologies. He is a member of the SEMI Advanced Packaging Conference committee, a founder member of ESiPAT, the European packaging, assembly and test special interest group and a member of the EPSRC College.
Summary of IMAPS-UK Activities:
– 2004 Joined the IMAPS-UK committee
– 2007-09 Served as Chair
– 2009-11 Served as Past Chair
– 2015 Resigned from Committee and appointed the IMAPS-UK Secretariat
– 2020 Re-joined as Committee Member
– 2021 Took the post of Secretary