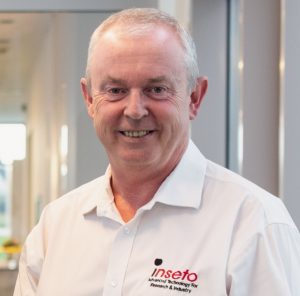 After completing his B. Eng. in Electronics at the University of Limerick, Eamonn joined Analog Devices in 1986, starting as an In-Line Test Engineer before becoming a Process Engineer. Both roles gave him a valuable understanding of the Hybrid Thick-Film industry, especially the die attach and wirebond processes, as well as a detailed knowledge of the requirements of environmental testing such as burn-in, temperature cycling, and temperature shock. Transitioning to Analog’s Monolithic IC division, Eamonn finished his time at Analog as their IC Production Manager, which allowed him to gain experience in wafer-level test & probe, package-level test, and the demands of a modern production environment.
Moving to Dage Intersem in the mid-nineties was the beginning of Eamonn’s sales career. Primarily responsible for die attach products such as eutectic solder and adhesives, the various materials used in wire & ribbon bonding, and the packaging requirements that the Hi-Rel industry demands, Eamonn gained valuable experience with Dage before joining Inseto in 1996 in a similar role.
With Inseto his responsibilities have expanded to include substrate materials such as thick film inks & thin film substrates, as well as a comprehensive range of adhesives for various applications within the microelectronics industry, specifically die attach adhesive & IC encapsulation materials.
As his role within Inseto has grown, Eamonn joined the Board of Directors in 2010 to become a part of the strategic leadership team sustaining and guiding the company in the sometimes difficult environment of the UK’s electronics industry!